For some, it is an architectural treasure in the Zillertal mountains, for others it is a place of quiet reflection. Families appreciate the impressive building as a popular excursion destination, combined with a leisurely circular hike along the bank of the reservoir.

The Capella Granata was designed by the Swiss star architect Mario Botta and completed in the autumn of 2013. Its shape is similar to a mineral, that is particularly common in Zillertal: the garnet.

Artistic inside
and out

The chapel is clad with local larch wood inside. Special light effects are created by the dome and two windows in the shape of a cross in the facade. Zillertal garnet inlays can also be found in the walnut altar that was designed by the artist Markus Thurner from Maurach am Achensee. The chapel is dedicated to the blessed Engelbert Kolland.

You can reach the Capella Granata by the Finkenberger Almbahnen. It‘s just a tenminute walk up to the chapel from the Penkenjoch top station. However, there is also a pleasant mountain bike ride that leads right past the chapel!

Pepi the bear awaits all young and old guests with indoor and outdoor play area!

Swing through the air on 6 different swings and be almost close enough to touch the surrounding mountain peaks.

Test your skills at low altitude: finding the right balance in the low ropes course is not always easy!

The Granatkapelle is a chapel,  known as a place of contemplation and silence. The architectural gem can easily be reached by walking along the reservoir.

From Finkenberg you can take a leisurely gondola ride over 2 sections to the Penkenjoch and start in the middle of Pepi's mountain summer. 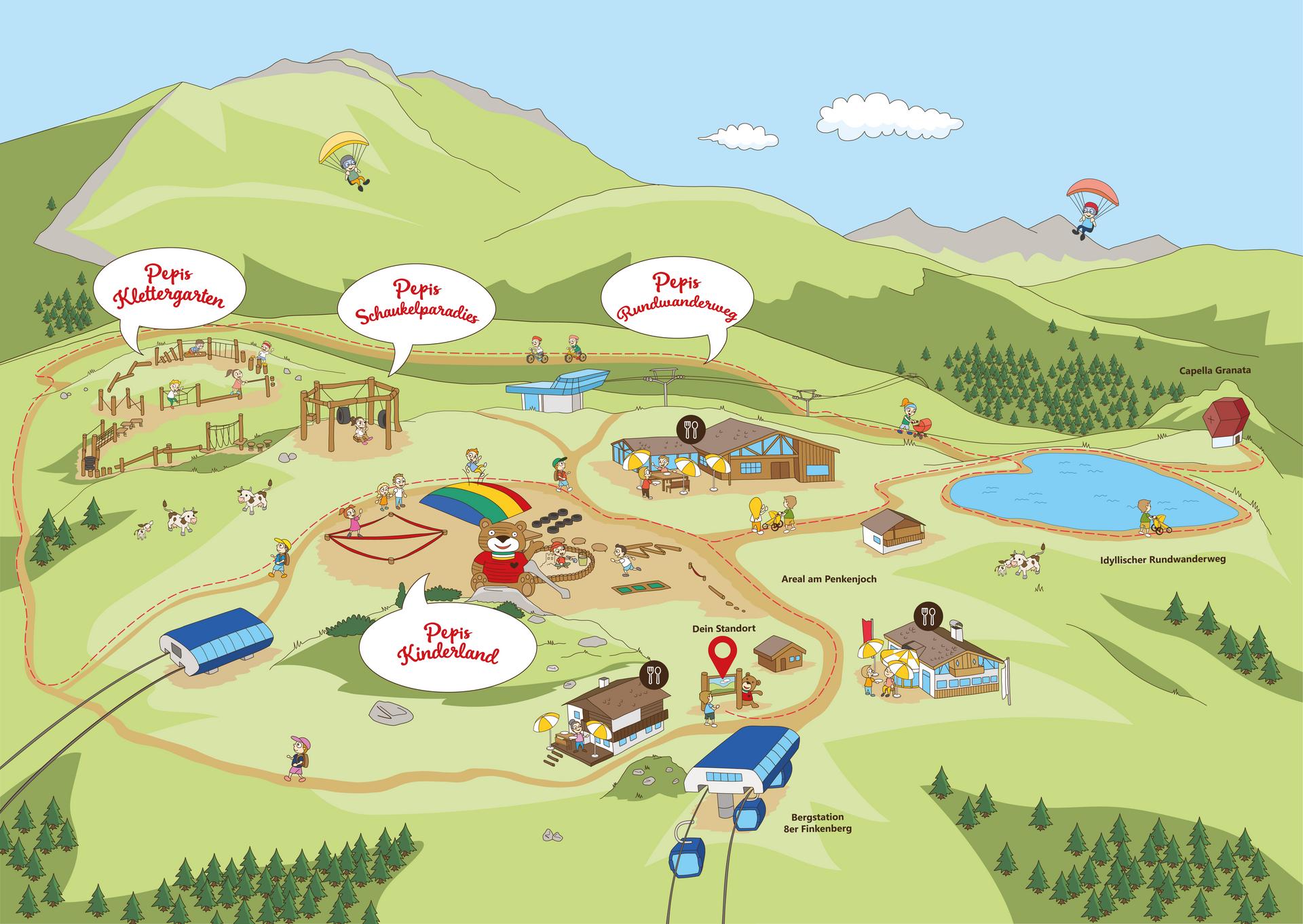 Mario Botta was born on April 1, 1943 in Ticino (CH). At 15 he began an apprenticeship as a draftsman in Lugano. After attending the Liceo Artistico in Milan, he began studying architecture in Venice, which he completed in 1969. In the same year he founded his own architecture office in Lugano. Botta is the most important representative of the well-known "Ticino School". Buildings from his hand are mainly in his homeland and in neighboring northern Italy, but now also in the USA, China and South Korea.

➤ Why did you choose steel and wood as the building materials?

The idea was to base the shape on that of the natural garnet and to make it the theme of this chapel. This was realised using the materials steel and wood. The strict mathematically reproducible geometry of this structure is supposed to represent the strict contrast between the rationality of people and free organic nature. Such a pure shape, this kind of gemstone at the top of a mountain, is also an opportunity to illustrate the connection between heaven and earth. The structure is connected to the earth‘s crust by gravity but it is surrounded by the endlessness of the universe and the beautiful nature of the Zillertal.

➤ Was it something extraordinary for you to build at this altitude and in this setting?

Seen purely technically it was all about building this geometrical structure out of twelve equal-sized panels at this altitude. However, we were also thinking about a light wood construction inside as a contrast to the hard Corten steel which is harsh and wind and rain repellent. A soft core with a hard shell you might say. Like a nut. It was about playing with these two emotions. Seemingly impenetrable from the outside. But once you are inside you discover a sweet, soft fruit.

➤ What else could you imagine building in Zillertal?

I really like the valley as the elements of nature, the mountains, are very present. And these mountains actually already form a space, a building, built by nature. I find an incredible strength here. I really value that. I don‘t have any specific ideas for a building as the architect does not choose the theme. The architect is an instrument of society and does what society desires. It may be a chapel or a hotel. However, it was a really wonderful experience and a challenge to work here.

The architectural jewel is known as a place of quiet reflection on the Penkenjoch and can be reached via a leisurely walk.
read more

In addition to leisurely hiking routes that are suitable for prams, demanding summit tours also start from the mountain station of the Finkenberger Almbahnen.
read more

At the pump track at the valley station of the Finkenberger Almbahnen, a freely accessible course offers fun with everything that rolls!
read more